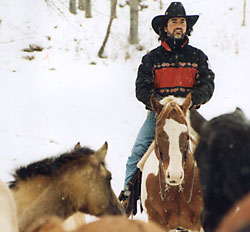 The Black Hills before sunrise are violet and lavender, smoky as they caress the horizon. Morning breaks with otherworldly beauty, shimmering gold, tangerine and fire.

More than 150 Native actors, dressed in 1890 Lakota garb, gather in the center of the set, to invoke the blessing of the Creator. The wind is cold and sharp, the sky, blue and clear.

Sonny Richards (Lakota Ceremonial Advisor), John Fusco (the screenplay writer you've been reading about all year), Viggo Mortensen (movie star, soon to be mega-star) and David MidThunder (Lakota actor/brother and all around great guy) pass the canunpa and honor the One.

Sonny offers tobacco and speaks in a strong, fine voice as the drum rhythms pound. The people here have opened their hearts and joined them, each to the other. More than 100 young, white men dapperly dressed as cavalry soldiers, are silent in their veneration and 100's of crew send up their prayers. All are brothers and sisters this day.

The power is palpable, spirits are present and it is a privilege to stand in this company.

The ceremony complete, Disney is now ready, upon this blessed land, to begin filming the Massacre at Wounded Knee. From John Fusco's script, the studio is approaching this terrible time in our history with great respect and unrelenting attention to detail.

I have promised you the John Fusco story and it has been a long journey from the summer sands of early May to the wild, bright skies of late November.

He is, brothers and sisters, a sweet soul. He speaks with the voice of a poet, wears an open, ready smile and blue jeans. He is gentle with elders and children, with women, men and horses. He is, in every aspect, a gentleman. He is kind and considerate (made sure I had transport, so I would not have to tackle the vagaries of lonely, dark drives in unfamiliar South Dakota territory). He is a talented story teller and the best friend we've ever had in Hollywood. (Although he eschews the place, preferring to live with his family, horses and dogs in lush, peaceful Vermont.) Through the production of his screenplays, he has employed more Indian people, in front of and behind the camera, than anyone else in history. Ever. Just this year alone, with SPIRIT, STALLION OF THE CIMARRON, DREAMKEEPER (scheduled to air on ABC in May) and now HIDALGO (to be released mid-2003), more than 800 Native American people have been put on the payroll. Here finally, is John Fusco...

Natalie Noel: "John, even in your earlier work, before you went to Pine Ridge, you wrote about Native America with great reverence."

John Fusco: "I never took Native history at face value, I always looked deeper into it.

"When we started the filming (of YOUNG GUNS), I became friends with a Hopi lady. I had been listening to the music of Buddy Redbow, who was a Native American singer/songwriter, kind of an Indian Bruce Springsteen. His music had been inspiring me, it was a real calling to me. The music had a profound effect on me, there is a real truth in his music.

"In early 87, I was approached by Tristar (Pictures). Perhaps, because of reading the Lou Diamond Phillips character in the YOUNG GUNS script, they said, "We know you have a real interest in the Native American world. We want to do a story about this Indian cop who comes from the reservation and goes to the big city." (laughs) I remember at the time, I thought, 'Oh, God, I've got to say yes, just so no one else takes it and does something disastrous. Let me take it for now and see what I can make happen.'

"Buddy's music was taking me more into the Lakota world, into the history of the Lakota people, into the more recent history of the stuff that went on in the 70's. I read (Peter) Matthiessen's IN THE SPIRIT OF CRAZY HORSE and I felt this is what I'm being drawn to, this is the story I need to tell.

"I was telling this Hopi lady about Buddy's music, about how much I loved it, and she said, "I love Buddy, he's a friend of mine."

"About 2 days later, I got a call from her, I was in New Mexico. She said, "Buddy's here in Taos, come up and meet him."

"So, I went up and met him and we instantly hit it off. We spent a couple of days driving around New Mexico talking and I told him about the idea that I had."

NN: "You told him about the film you wanted to write, as opposed to what they (the studio, Tristar) hired you to write?"

JF: "Yes, which was basically the genesis of THUNDERHEART. I felt it was a real interesting way to fictionalize the approach, but get to the spirit of the story.

"Buddy said, "If you're gonna do this you've got to come to Pine Ridge and meet Grandpa Fools Crow, you've got to talk to Grandpa first. He's the highest ranking ceremonial chief, he's a heavy duty medicine man." Those were his words. "Taku Wakan, very heavy duty. And get his blessing. We'll feel it out and take it from there. Before I open up any doors to you, I really have to take you to see Grandpa."

He wrapped YOUNG GUNS and started driving toward Pine Ridge with his wife and his dog. Following Buddy's instructions, he stopped in Colorado.

JF: "I stopped at this address in Colorado and found this guy who was one of Grandpa Fools Crow's medicine students. He said, "Yeah, we need to sweat you before you go. Buddy said you've got some heavy ideas going, and we want you to go into the lodge before you go to Pine Ridge." So, I went into the lodge, purified, then drove on to Hot Springs.

"In the research I had been doing, the name Fools Crow was legendary. I knew that he was born around the time of the Wounded Knee Massacre, that he was of the last Medicine Men really considered a Holy Man (Wicasa Wakan in Lakota), although some will dispute that and say the last Holy Men are long gone."

JF: "Yes. We went to this little trailer on Porcupine, across American Horse Creek on the rez and spent the day with Grandpa Fools Crow. I spoke, and with Buddy as an interpreter, Grandpa and I talked. I was explaining to him why I wanted to tell this story."

JF: "I told him that people today were not aware that the Indian wars were still going on. That there are people in the country who were looking at Indian people as quaint museum pieces and people who didn't even know that there were still Native Americans alive. I said, 'What I really want to do is tell the true story about what happened out here during the 70's, show the type of stuff that went on, to show that the Indian wars still go on in different ways, more subtle ways, to let the people see.'

"He brought out the pipe, the canunpa. We passed the pipe and we smoked. He was quiet for a lot of the time while we smokedthen he told Buddy, he felt that my heart was pure and that I was meant to tell this story."

NN: "After talking with you for the first time?"

JF: "After smoking the pipe with me.

"Then he told Buddy, "I want you to bring him back here, come back and see me, but start teaching him Lakota language, so I can speak more openly to him."

"That was a real motivation to learn the language and Buddy was my teacher, Buddy and his father."

John traveled to Pine Ridge from Vermont many times after this first meeting. He grew "closer and closer to Grandpa Fools Crow. And started to become a part of this tiospaye (extended family) around the rez.

"I felt such a connection for the first time. I felt like I had been praying this way for a long time. But now, it was like, 'Wow!, I've found my spiritual home. I really feel connected with this truth I've always known.' And I felt very privileged that this was being shared with me.

"I began to feel that maybe it was a mistake to jeopardize it or compromise it, by even doing the movie project.

It is now 1988 and the studio, Tristar, is still awaiting 'the rez Indian goes to the big city' script. Meanwhile, John is immersing himself in Lakota life-way and has no intention of delivering their silly, stereotypical project. He was actually thinking of delivering nothing at all.

JF: "I felt like I would compromise the path.

"Then Buddy talked to Grandpa and Grandpa said, "No! You've got to do this movie, this is the path, this is part of the path."

NN: "Were you afraid that you would go back to Tristar and say, "Look this is what I want to write." And they were going to say, "You're out of your mind, kid! We'll get somebody else?"

Tristar replied, "This is not what we sent you off to write." But they loved THUNDERHEART anyway and picked it up. Thus began the journey through "proverbial development hell."

The project was, finally, saved when Robert De Niro came aboard.

JF: "Which is one of the most incredible memories that I have and surreal. I was sitting there between two of my heroes, two legends from two different worlds, Robert De Niro and Chief Fools Crow.

"He signed on as producer, he and his partner, Jane Rosenthal. I was also a producer and it became a joint project. Then it really started steamrolling.

"Grandpa said, "I want one of those chairs, one of those director's chairs, with my name, Chief Fools Crow, on it and I want to sit there and watch everything."

"He died just before we got a greenlight (November 27, 1989). That was really sad. We got the chair for him and we put a star quilt in it every day on the set. And we shot on Pine Ridge, as you know. We cast people right off the rez. It was just(his blue eyes are soft with memory and emotion) the whole experience was incredible."

More with John next time. His is such an extraordinary story, we need at least two chapters.

Contact me anytime at: goddess-2@msn.com Much love during this holiday season and always, Natalie