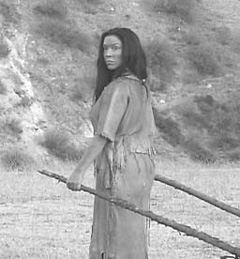 Back to school, back to work, back from summer, back to Hollywood. And hold on to your hats, kids, it's gonna be a bumpy, busy, glittery Tinseltown ride!

Jay Tavare is poised to be the Next Native American Movie Star. It's not just his awe inspiring body (I'm not kidding girls! This guy is stunning!! And guess what?... a perfect gentleman too!), his disarming charm, his dashing smile, his startling talent, his martial arts training or the fact that he can ride the heck out of a horse! There is something even greater here, the fact that Hollywood heavyweights are standing up and taking notice of Jay.

There is one film shooting right now that can boast 5 Academy Awards amongst the folks who are creating it. The film is COLD MOUNTAIN and it began lensing in early July in Romania. Readers of TGR will remember some weeks ago, when I wrote that COLD MOUNTAIN was seeking an Indian Warrior type to play the Native American lead character, "Swimmer." Well, Jay Tavare got the call.

Oscar winning Director Anthony Minghella (THE ENGLISH PATIENT, THE TALENTED MR. RIPLEY) adapted the screenplay from the award winning novel by Charles Frazier. It has been 5 years in development (so when it takes a while to get your work seen, fret not... it takes the big guns a long time to get shooting too!).

Set just before the start of the Civil War in the 1860s, COLD MOUNTAIN tells the story of Inman (Law) who falls in love with Ada (Kidman). Inman leaves his picturesque home town and begins a perilous journey with his best friend, a Cherokee warrior, Swimmer (our brother, Jay).

In his detailed preparation for the role, Jay learned Kituhwa, the Eastern Cherokee dialect and studied many historical documents about the Cherokees' involvement in the Civil War. Jay feels heavily his responsibility for representing the Cherokee people in an accurate and respectful manner. I feel sure he will do the Cherokees, and all of us, proud.

For complete details, please check out the next TGR when we will profile "Swimmer" himself, in THE GLITTER REPORT EXCLUSIVE WITH JAY TAVARE.

John Fusco's HIDALGO has been shooting all over the place: Hollywood, Montana and now Morocco! David MidThunder, one of the on-set Lakota dialect coaches to Viggo Mortensen (who plays half-breed Lakota Frank Hopkins) says of Viggo, "He's doing really well. He is very concerned with speaking the Lakota properly and is working very hard. He is patient and diligent, but what's really cool about him is he's really humble. He's the star of the show and he's really cool!" 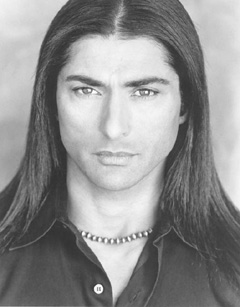 Sonny Richards is the other Lakota dialect coach to Viggo Mortensen. A Pine Ridge Oglala, Sonny is the ceremonial advisor for HIDALGO. He will orchestrate the Ghost Dance sequences which will be filmed in South Dakota this November. A long time advisor to Fusco (they worked together 10 years ago on THUNDERHEART and recently on DREAMKEEPER), Sonny is his Pine Ridge relation.

Floyd also makes an appearance (fresh from the Calgary set of DREAMKEEPER) and his buddy, Darryl Standing Elk, is his on-set dialect coach. Rod Rondeaux, the best darned Indian Cowboy in the business, not only handles all the Native horsemen and their stunts, he is the only Indian dude traveling to Morocco where he'll race Arab guys across the desert in the re-creation of the famed 1890 Arabian Desert Challenge. Good luck to all in the sands of North Africa and keep me posted!

LAST STAND is detailed in The Native American Section of BILLBOARD MAGAZINE, publish date, August 31, 2002. This heart-wrenchingly beautiful little film will screen in LA, October 18, 19 & 20 (visit to find venues. Cast/crew bios are posted on the site, along with production contact info.), in order to be eligible for Academy Award consideration. Wouldn't that be cool, for an Indian short film to nominated for an Oscar!

GLITTER NOTE: A little known fact, but certainly not a secret - Yvonne Tello and I both play featured extra roles in LAST STAND. We are Lakota Warrior Women who chase down a half-naked white calvary soldier and beat him to death with clubs! Not at all glamorous, we're wearing heavy buckskin dresses (no breeches, but we didn't point this out - it was too darned hot and we didn't figure anyone seeing the film will really notice) and our only make-up is dirt, mud and one ragged feather!

We're glad Writer/Producer/Director Gabe Torres put the warrior women in the script, because we all know, Native women are continually depicted in Hollywood as gathering/preparing food, giving birth, caring for children, being violated by white men, or posing as beautiful Poca-type virgins. Which has truth to it, but as we also know, Native women are strong, fierce, independent, a force to be reckoned with, now in 2002, as well as throughout history.

It's time Hollywood sees us as multilayered, capable and powerful. It's fun to be beautiful and put on our make-up, but sometimes we're wearing war paint and are to be feared.

FOX studios, under the direction of Diversity Development Sr. VP Mitsy Wilson (one of our favorite sisters in Hollywood, who is always front and center when it comes to making the man take notice and reminding the big guns that we are still here!! We love you Mitsy!!) and Gerald Alcantar held their first American Indian Summer Institute program to acquaint young, red brothers and sisters with showbiz career possibilities behind the camera. The lucky participants from all over Indian country were: Marsha Aguino, Demina Becker, Erin Lee Benson, Myron Leonard, Joe Loya, Justin Martinez, Mark Nadal, Roscoe Pond, Sherrick Roanhorse, Melissa Scott, Eagle Young, Ray Halbritter and Rachel Morrow.

Special thanks to Tom Bee, Dawn Jackson, Tiffany Rocquemore-Delorme and Noah Emmerich, for taking time out of their busy lives to come chat and chill with the kids. You guys are truly inspirational!!

A debt of gratitude and much love to John Fusco for providing the HIDALGO updates. Travel well and safely, my brother. I'll send up strong prayers for you and yours from the mountain.

And a big "Hello" to Clem Holyeagle, Hoop Dancer, chemical-free role-model and ultra-cool Indian man! Keep it up Clem, for all of us! Send me your glitter! I've been too long away and miss you all, terribly! goddess-2@msn.com