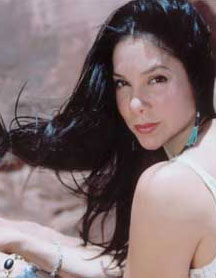 Happy, Happy New Year! I hope everyone had a wonderful holiday season filled with the love of family, tons of good food, great music, communion with the One, smiles, kisses and Glitter galore!

This is the First Anniversary of THE GLITTER REPORT (YIPEE!!), and I am thrilled to be writing you from home, from Choctaw land on the former aracauna chicken farm where, not so very long ago, I was raised by Mama Bush. Although the chickens are gone, there are plenty of raccoons, opossum, dogs, cats, squirrels, turkey vultures and a gazillion other kinds of birds and my little Momzie feeds them all. (Guys, there's a special raccoon with whom I have fallen in love. I've named him Bear-don't know what he's named me (!)--he eats from my hand with his little monkey paws!Do I really have to go back to LA?) This is Mobile, Alabama, The Redneck Riviera, Mother of the Mystics (where Mardi Gras was born in this country-bet you didn't know that), Home of the Azalea Trail. And I love it! It has been said that Southerners always come home. Not to die; to eat gumbo!!

Gosh there's a lot going on in Tinseltown, my mailbox and my email will be full to overflowing when I get back.

Let's see if I can get this in some kind of order: Brian Wescott has been working on SEA BISCUIT with an American Federation of Musicians contract! He's been playing a little Cole Porter on piano for the film-and I didn't even know he could play! Congrats, my brother and much love! I promise to write more about all your accomplishments this year.

David MidThunder has been busy in the studio with DREAMKEEPER ADR (audio digital recording) laying down tracks for the voice of Eagle Boy and lending his authentic Lakota to the ABC mini-series. Says John Fusco, writer of the piece, "Chaske' (the performer who portrays Eagle Boy) is an impressive actor and a hard worker. But his voice is simply not Sioux--by the way, Grandpa Fools Crow gave me permission to use "Sioux"--. (GLITTER NOTE: You'll recall John's close relationship with Grandpa Fools Crow, brothers and sisters, from TGRX w/John parts 1 and 2 in December.) MidThunder is Lakota and is going through one of the seven rites of the Oglala. How can anyone else inform that voice with authenticity?"

Robert Zimiga, who's short film, WAKAN, premiered at the Palm Springs Native American Film Festival in November, is currently in negotiations with several independents for distribution in both the US and Europe! Good Luck, Robert, our prayers and best wishes are with you!

ADAPTATION, starring our own Jay Tavare, has WON 2 Golden Globes! Hooray! And Congratulations Jay!-can't wait to see what the Oscars have in store!! Jay also stars in COLD MOUNTIAN (which is currently in post-production), opposite Jude Law and Nicole Kidman. THE GLITTER REPORT EXCLUSIVE with Jay Tavare is coming up, kids, I promise--just hang in there!

By the way, before we go any further, something needs addressing. When I first arrived on the sunny shores of LaLa land, Floyd said something to me that I will never forget. I paraphrase. Natalie, he said, in 50 years there will be no more Indians. Why Floyd, what do you mean? We will do to ourselves what the white Europeans have never been able to do. We will annihilate ourselves with backbiting, finger pointing, blood quantum demands, Indian cards. We will bring about the end of the Indian, not the white man.

That was nearly 5 years ago and I had no idea what he meant, but I listened closely, as one always does with Floyd, and I remembered his words. Now I understand.

There are so precious few of us, in Hollywood, in the US, in Canada, in the world. Why do we insist on slamming each other, hurting each other, slandering each other? You're not Indian because you have no card, because your tribe is only State recognized, because you don't have black hair, you're not from the rez, you have blue eyes, your Mother or Father wasn't Indian, you don't look/seem/act Indian. What are we doing? Not just to each other, but to ourselves as a family, a community, a people? Are we really, out of ignorance, jealously or just plain meanness going to toll the death knell for ourselves? We must consider this quietly in our hearts, with our Maker and within our own conscious. What are we doing?

Jay Tavare's Mother is White Mountain Apache and Navajo-Deer Clan. Jay Tavare is Indian. Brian Westcott's Mother is Athabascan and Yup'ik; Brian is an enrolled Alaskan Native. Some folks think he looks like a white guy and maybe he does. Brian Westcott is Indian. Angelique Midthunder is English and Chinese; her husband David is Assiniboine-Sioux. Their daughter, Amber, is an enrolled tribal member at Fort Peck. Amber MidThunder is Indian. Robert Zimiga's Father is Oglala Lakota. Robert is the first to say he looks white. Robert Zimiga is Indian.

Let's use the power of our words and creative energies for the good. Let us better our lot in this world on this troubled planet in this time of need. Let us not waste our precious gifts of breath and time on slander, attacks and ugliness. It is beneath us and there is no point. Unless we wish to end all that we've inherited, all our ancestors died for, unless we wish to end ourselves right here and now.

Back to the Glitter-Yes, and the long awaited DREAMKEEPER sweeps across ABC in May. I have promised you a DREAMKEEPER Exclusive, brothers and sisters, you will get it and soon!

FIRST AMERICANS IN THE ARTS kicks off February 8 and Larry Gus, Larry Price and I will be there on a TOP SECRET ASSIGNMENT. But, have no fear, our cohort and sister in the trenches, Lita Rector, will bring you the entire coverage from the red feathered carpet!

The Grammys are live from New York in about 5 minutes and Tom Bee, Robert Doyle and all the usual suspects will be in attendance in tuxedoes, leather, sequins and limos. All the word from the Big Apple coming up

Then of course there's the Adam deal (finally! This one's been a year in the making) with ABC. Let's see what kind of series they drum up for him.

The PBS MYSTERY! Series with Wes, Adam, Shelia and Alex has gotten the greenlight for 2 more episodes! Cudos all around!

And Ron Howard is seeing every Indian man in Hollywood for LAST RIDE. How come they aren't casting any Indian women? I'm gonna call those guys and ask them what's up? Are you with me girls? Talk to me, let's make our voices heard!! And, hey, beautiful Native sisters, send those pics and bios to: Nat's Snaps c/o Brian Funnagan Management, 8017 Selma Avenue, Suite 202, Los Angeles, CA 90046. You never knowI did get more than 30 kids seen for PETER PAN, several seen for EVERWOOD and don't forget LAST STANDso send in those photographs!

Thanks for all the lovely notes, letters, emails and phone calls regarding TGRX with John Fusco parts 1 and 2. Glad you all think he's a cool guy and a great talent. He really is. And a good man too!

This is THE GLITTER REPORT and it's about sparkle, information, singing a good song, dancing a silly dance, writing some half-way verse, supporting our brothers and sisters and having fun.

Remember fun? It's why we all got into this business in the first place. It is laughter and the feeling of the pen flying across the page. It's the way your stomach grabs when Rodney screams, I am Wind In His Hair! Can you see that I am your brother? It's the way you really want the white virgin to take Wes's hand and not leap off that rock. It's the way you adore Adam half-naked on a white horse with a white feather in his hair teaching the monks about popcorn. It's the way you admire Valerie for including a passionate scene of a husband and wife making love! It's the way Irene so gracefully carried the Pocahontas legend across the world, so at least kids would have some knowledge of her. It's the way you scream and cheer when Spirit and Little Creek sail across that canyon to safety and freedom.

And then you cry. You always cry. Because it's beautiful. Because you have been touched, elevated, inspired. This is joy, brothers and sisters, and it is what has brought us together.

So let's jump head long into 2003 leading with our hearts! Let's work together, promote each other, offer our hands to help one another. We are family, we are one tribe, one community and we are all we've got.

Onward into Beauty! I love you all, Natalie